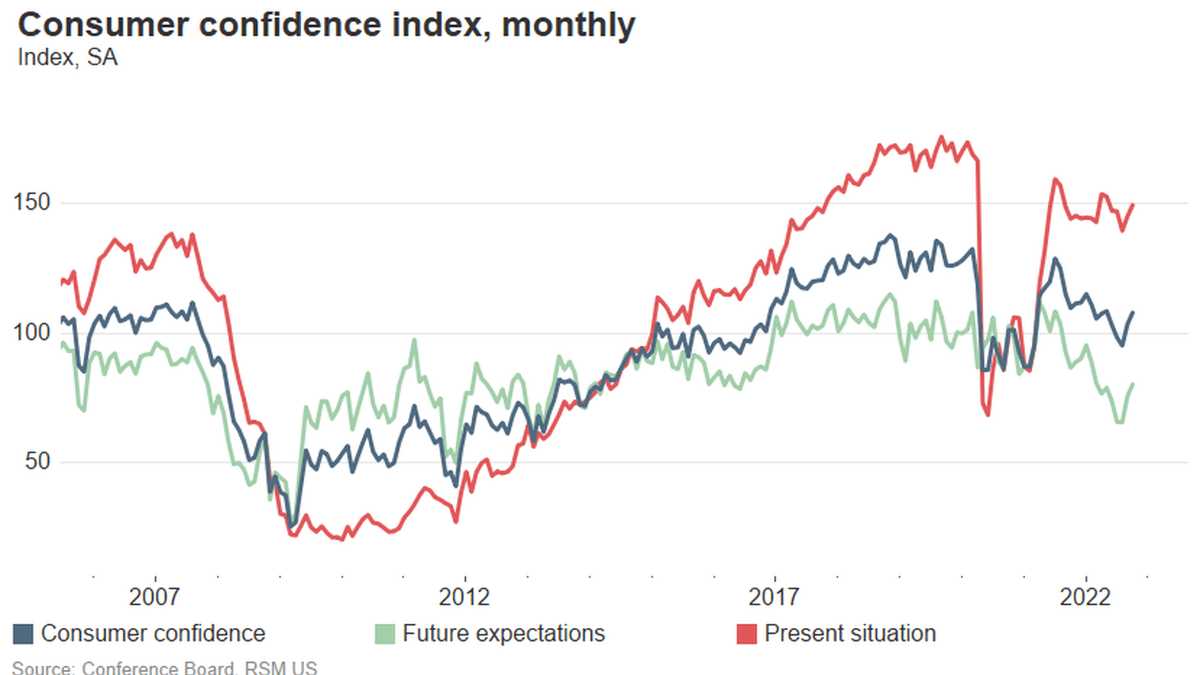 
American consumers and private businesses showed improved confidence in the economy despite recession concerns, according to economic data released on Tuesday.

The data reaffirmed our forecast of a solid economic rebound toward the end of the year, pushing our recession call to next year.

The Conference Board’s consumer confidence index rose above market’s expectation to 108 in September, the highest since May. The improvement was broad-based, with all major confidence subindexes like jobs, incomes, spending plans and expectations rising.

Released with a month lag, core capital goods orders—which exclude defense and aircraft—rose by a sharp 1.3% in August, significantly higher than the median forecast of 0.2%. July’s number was also revised higher to 0.7% from 0.3%. Because the core capital goods order number is a proxy for future private business investment, the sharp increases in orders should ease some recession fears.

For the current quarter, the shipments of core capital goods—which feeds into gross domestic product calculations for private investment—rose more modestly by 0.3% in August, after rising by 0.6% in July.

But it is important to note that lower inflation in July and August should give an upside boost to real core capital goods spending because the data was released in dollar terms.

In a separate report from the Census Bureau, new home sales rose unexpectedly by 28.8% in August to 685,000 annualized, likely showing a one-time break in the trend as the housing market continued to be dampened by rising mortgage rates. Whether it is a short-term fluctuation or not, it should add some relief to the residential component of GDP in the third quarter, which was down by 16.2% in the second quarter as one of the main drivers for the second decline in overall GDP in a row.

We expect there is still some room for the economy to grow in the second half of the year as the full impact of the Fed’s interest rate hikes won’t be fully felt any sooner than the middle of next year. Tuesday’s data helped to strengthen that forecast despite rising predictions of a recession as early as this quarter.

This article was written by Tuan Nguyen and originally appeared on 2022-09-27.
2022 RSM US LLP. All rights reserved.
https://realeconomy.rsmus.com/consumer-confidence-and-core-investment-grow-despite-recession-fear/