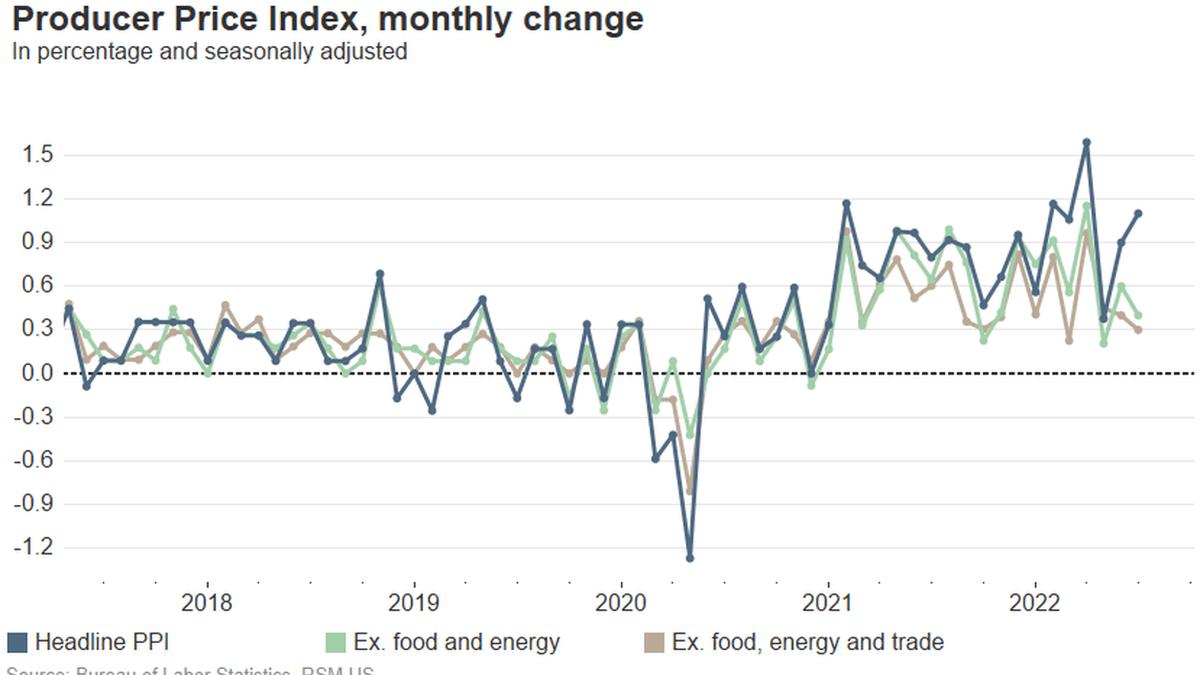 
New filings for jobless benefits last week rose by 3.8% to 244,000—the highest level since November, according to government data released Thursday.

The steady increase in new jobless claims, which are a proxy for layoffs, were in line with hiring freezes and layoff announcements coming from the technology and housing sectors in recent months.

But the weekly data should be taken with a grain of salt because it is often volatile around holiday weeks. In a separate report from the Bureau of Labor Statistics, producer inflation rose by a surprisingly strong 1.1% in June on a month-over-month basis and by 11.3% from a year ago, beating the market’s forecasts by a wide margin.

Sharp spikes in energy and food prices were the main factors that drove the upside surprise, which mirrored the consumer price index report for June released on Wednesday.

We expect that the data will put more pressure on the Federal Reserve’s rate-hike campaign, which will include another 75-basis-point hike this July, though a jumbo 100-point hike has become more likely. Much of the increase in new claims could be discounted by the noise around a holiday week. Still, the upward trend in new claims should not be dismissed.

Last week was the sixth in a row that new claims reached above the pre-pandemic level. Our measure of the longer-term trend—the 13-week moving average—continued its increase since May, rising to 216,000 from 211,000 in the prior week.

New jobless claims are not only a good proxy for layoffs but they also play an important role in the early growth forecast for gross domestic product, up to six months ahead of time, according to our GDP model.

But even though layoffs and hiring slowdowns are increasing, the tight labor market is helping workers find new jobs much more easily. Continuing claims declined for the week ending July 2, staying flat since May.

That also explained why the economy continued to add more jobs in June, according to the jobs report released last week.

The headline producer price index rose to a near record high at 11.5% year-over-year in June on the back of rising energy and food prices. The core index, which excludes food and energy, rose by 8.2%, down from an upwardly revised 8.5% in May.

The upside surprise in producer inflation added to the Fed’s task of taming inflation while keeping the economy growing, and bolsters the argument from some quarters for a 100-basis-point rate hike at the end of the month. The wholesale and retail trade component—a proxy for sales margins—rose by 0.8% in June and by 0.5% on a three-month moving average, significantly lower than last year’s average, highlighting the inflation problem that has continued to eat into profit margins.

This article was written by Tuan Nguyen and originally appeared on 2022-07-14.
2022 RSM US LLP. All rights reserved.
https://realeconomy.rsmus.com/jobless-claims-and-producer-inflation-showed-upside-surprises/