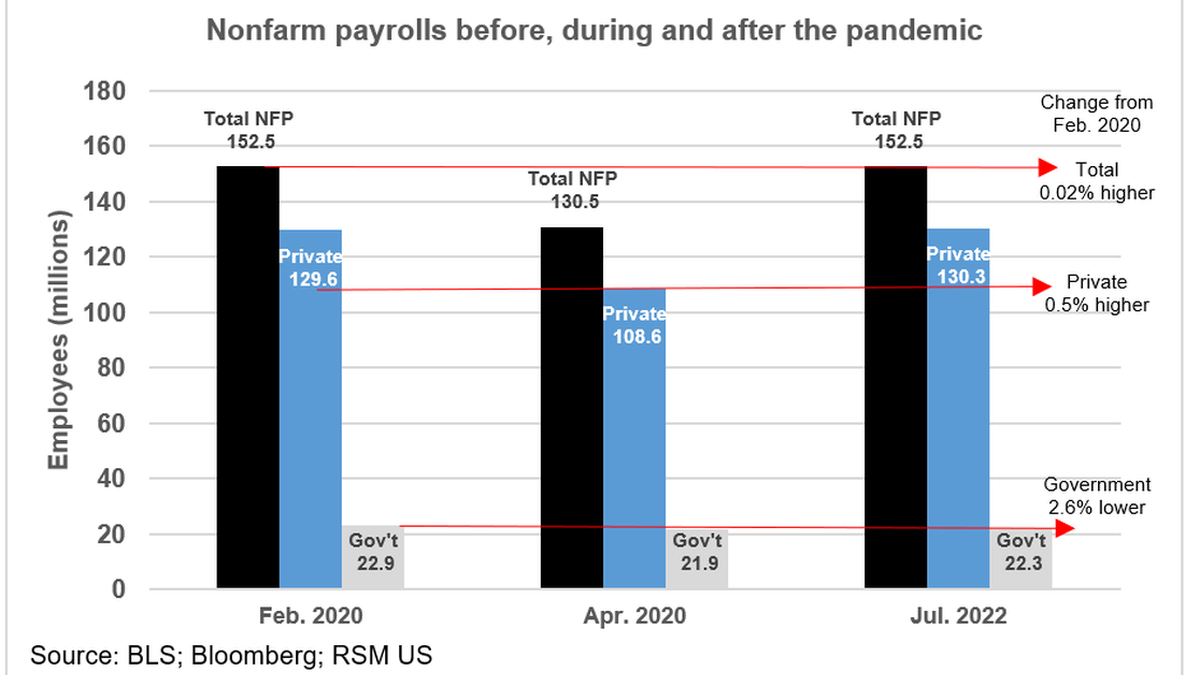 
The unemployment rate in the United States, taken out to three decimal points, now stands at 3.458%, the lowest in 50 years and one that many of us will most likely not observe again in our career arcs.

Perhaps more important, the labor market has reached a milestone: a general return to pre-pandemic levels of employment.

Friday’s Bureau of Labor Statistics jobs report shows that 152.5 million people were on the payrolls of private employers in July, surpassing the February 2020 level by 0.02%.

As one might expect following such a large set of shocks as those absorbed during the pandemic, government employment remains 2.6% lower, with local governments yet to fill pre-pandemic ranks. In the goods-producing sector, construction employment returned to the pre-pandemic level in February and manufacturing reached that level in June, but mining employment still shows a deficit.

And in the service sector, while employment levels in trade and transportation, and in professional and business services, now surpass 2020 levels, employment deficits remain in leisure and hospitality, and in local government. The return to pre-pandemic levels of employment is a big step in the right direction, having taken 29 months to erase the employment deficits in all but a few occupations.

But because of the depth and duration of the shock, many areas of the labor market are still playing catch-up.

In addition, economic output increased by roughly 2.5% in those 29 months—an average annual rate of only 1% per year. That illustrates the need for growth in the labor market and for targeted accommodative fiscal policies to match the need for restrictive monetary policy in this era of price instability.

Given rapidly changing labor market dynamics and demographics, it is likely that at some point the political authority will need to reassess immigration policy to meet basic labor demand in the economy.

This article was written by Joseph Brusuelas and originally appeared on 2022-08-08.
2022 RSM US LLP. All rights reserved.
https://realeconomy.rsmus.com/payroll-employment-returns-to-pre-pandemic-levels/