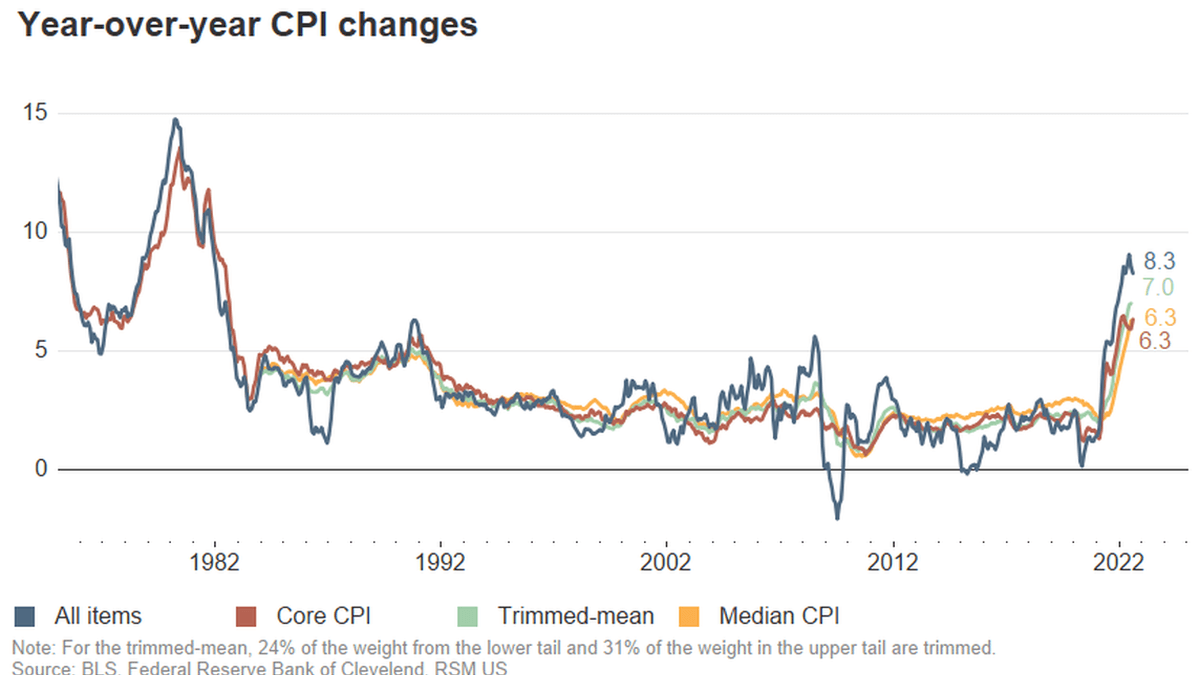 
Premature calls for the Federal Reserve to pause or pivot on its campaign to tame inflation should be politely dismissed given the 0.1% increase in top-line inflation in August.

That gain translates into a 8.3% year-over-year increase in the headline number, according to government data released Tuesday. Core inflation, which strips out food and energy prices, increased by 0.6% on the month and by 6.3% year over year.

Even though supply chain snarls are easing, gasoline prices are falling and global aggregate demand is cooling, for the Fed to pull back on its current policy path would be a strategic error of epic proportions. After falling behind the curve and letting inflation get out of the box, the central bank is highly unlikely to make a second major policy error in three years.

Despite the obvious improvement in the inflation data and the probability that the pace of price increases will continue to ease, the Federal Reserve must demonstrate resolve and put forward another super-sized rate increase of 75 basis points at its meeting next week.

In addition, Fed officials need to push the federal funds policy rate to at least 4% or higher before considering any pause to ascertain the impact of past policy increases. It is important that policymakers, investors and firm managers understand the risk around the upcoming price cap on Russian oil exports that Washington and its allies intend to impose on Dec. 5.

Should Moscow cut off all natural gas and oil exports to the European Union, United States and United Kingdom, then it is highly probable that oil prices will retest the highs set in June and cause the average price of regular gas to move well back above the current average of $3.70 per gallon.

Changing the policy course at this point is neither prudent nor wise and would lead to a stop-and-start monetary policy that would create confusion, likely cause inflation expectations to move higher and further erode central bank credibility.

Service costs, which account for the overwhelming majority of economic activity, increased by 0.7% on the month and were up by 6.8% on the year.

Housing, which in our estimation should be one of the targets of policy, increased by 0.8% in August as shelter advanced by 0.7% and the owners’ equivalent rent series increased by that same amount. The cost of housing has now increased by 7.8% on a year-ago basis.

The more encouraging aspect of the report was the 10.6% decline in gasoline prices. Overall, energy costs fell by 5% on the month, and energy commodities declined by 10.1%. That will almost certainly continue in the September report given the sustained decline in energy and gasoline prices.

Just as encouraging was the 2.3% decline in transportation costs on the month, with the price of used cars falling by 0.1%, airline fares declining by 4.6% and the price of new vehicles advancing by 0.8%. Inflation conditions have modestly improved over the past two months. Yet that improvement is not anywhere near the clear and convincing type that the Federal Reserve will need to alter the direction of monetary policy.

In addition, the spreading out of inflation into the housing sector shows no signs of abatement; in our estimation, we have a good year or so to go before the data in that critical ecosystem improves.

In the end, the central bank will continue to hike rates. Eventually those increases will cause an easing and then outright declines in employment, which in all probability is how inflation will be put back in the box.

This article was written by Joseph Brusuelas and originally appeared on 2022-09-13.
2022 RSM US LLP. All rights reserved.
https://realeconomy.rsmus.com/u-s-august-cpi-core-inflation-arrives-hot-even-as-gas-prices-fall/